An Open Letter to the United States Department of Justice (DOJ).

An Open Letter to the United States Department of Justice (DOJ).
The National Domestic Violence Hotline with support from the United States Department of Justice Office on Violence Against Women has announced a 10-year Blueprint to redefine domestic violence primarily or only as, violence against women. The Press Release notes that 33 million American women are abused each year. The press release ignores male victimization, perhaps believing similar to the majority of domestic violence advocates, public policy makers, the main-stream media and the general public, that male victimization is so rare that they need not care or know about it.
However, what surprises this author is that it appears that the DOJ, through the Office on Violence Against Women, has decided to publicly disclose that the DOJ is either not aware of or simply does not care about the male victims of domestic violence.
If you visit the National Domestic Violence Hotline (NDVH) website http://www.ndvh.org/ it is obvious that the NDVH is concerned primarily about violence against women.
Although the NDVH receives millions of dollars from the federal government it is a private organization and it has the right, as it website documents, to minimize, marginalize or ignore male victimization. However, the Office on Violence Against Women, as an integral department within of the United States Department of Justice, should not be “driven by ideology and stakeholder interests [i.e. NDVH] rather than by plausible theories and scientific evidence of cause.”
The above quote is from page 6 of the National Research Council report, Advancing the Federal Research Agenda on Violence Against Women. I suggest that someone from the DOJ needs to read this important scientific evidence-based NRC report that is free of ideology and reconsider the DOJ decision to ignore male victimization.
The data below is from page 48 and 49 of that report. The report in its entirety is available online at http://www.nap.edu/catalog.php?record_id=10849 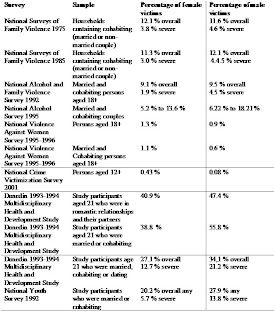